Le Monstr doesn’t just work with anyone. Well, he’ll work with anyone, but they need to fit with his values and be willing to let him interpret the brief using his style. He’s got one or two exceptions though: he won’t work for meat and dairy companies (he’s vegan) and he’ll politely decline to work with you if what you’re selling doesn’t interest him or doesn’t give him enough freedom to work. Le Monstr summarized his relationship to his work better than I ever could: “I live on a budget that’s not huge so I have the flexibility to say no. Staying inspired is important to me and my inspiration tends to come when I’m not working. Making art is a job for me. A job I love. But a job. And I don’t always want to be working.” How can you not agree with that?

A big part of Le Monstr’s vetting process is how he vibes with the person or company he’ll be working with. And, lucky for us here at oxio, we “have a pretty good vibe”. Aka, we gave him a theme (equal access to the internet) and then let him do his thing.

But, why are we talking about Le Monstr, a Montréal street artist, on the blog of an internet service provider? Well, we’re all about equal access to the internet and the opportunities that come with it. And for us, that means giving those who want it a platform and a voice. One way we’re doing that is by working with a new artist every few months. This gives them a bit of visibility (and we obviously pay them) and gives us new pictures to look at. Win win.

We know what you’re thinking: “but won’t it be confusing to always change the style of your illustrations?” Maybe. But we don’t want to be known for one illustration style. We want to be a constant disruptor in everything we do. Bringing new ideas and new ways to look at old ideas. Plus we’re oxio and we'll always leave room for chaos. After all, a little chaos is what makes oxio, oxio. Rules were made to be broken, right?

Okay, enough about us, back to Le Monstr.

Who is Le Monstr anyways? 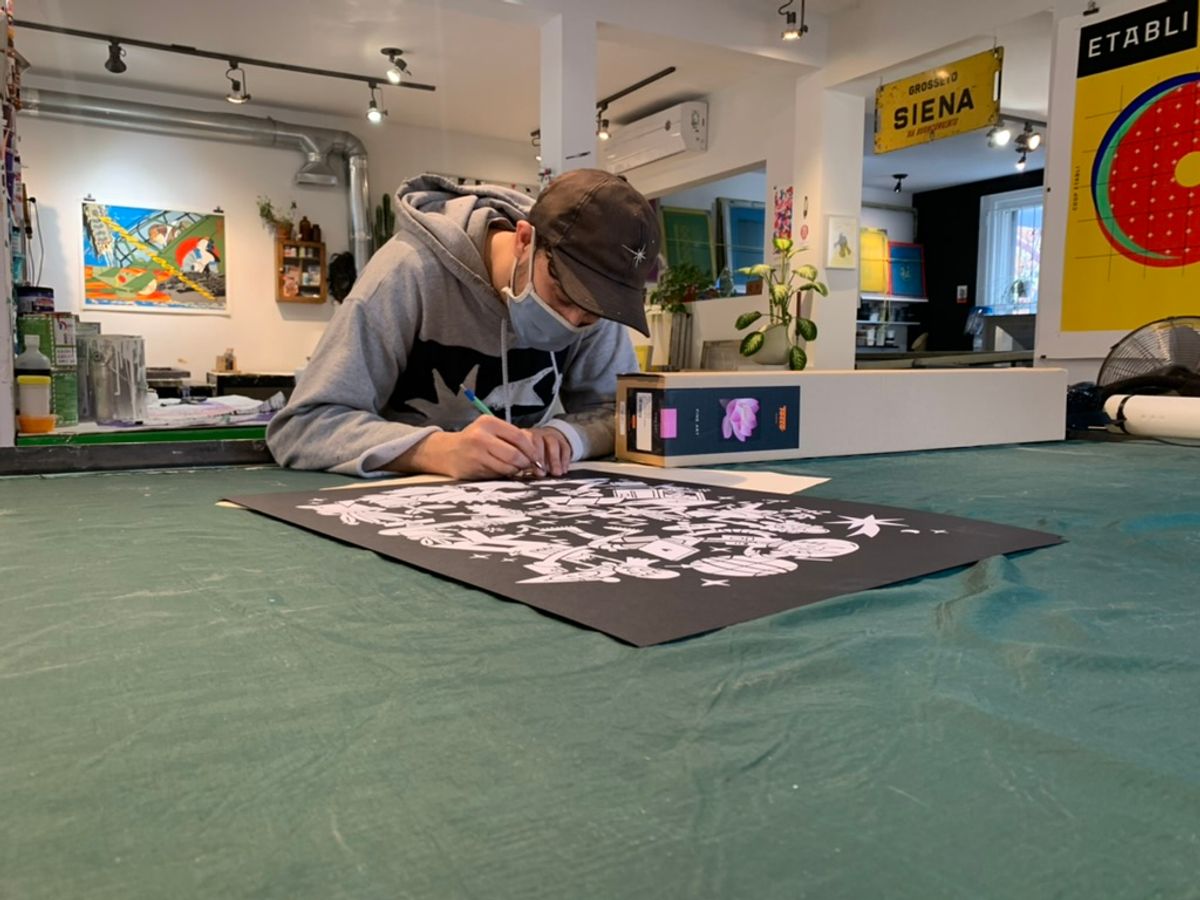 Since his website already wrote all about him, I’ll just copy and paste his bio right here:

Originally from Annecy (France), Benjamin Tran is a Franco-Canadian artist, also known as Le Monstr or as crayonpapier on Instagram. His production includes paintings, murals, drawings, and sculptures. Monstr graduated in Graphic Design from the Lafontaine School and has perfected his style during his year at the Condé School in Paris. In 2012, Benjamin moved to Montreal where he has been living and working ever since.

Wait. What’s the point of this article?

Believe it or not, the point of this article was to let you know that a) we’ll be adding new illustrations every couple of months and b) to interview Le Monstr so y’all can get to know him and how he works. You now know we’re going to work with different artists and change up our illustration style every so often. So, here’s the interview part:

I interviewed Le Monstr on Thursday April 14, 2022 after picking up the silkscreen posters we commissioned for a contest with URBANIA and our helpers on Discord. As a heads up: this interview happened in French and I took pretty horrible notes in franglais during the interview. So consider this interview “adapted from its original form”.

David: How do you approach a new project? Especially one with a vague brief like “equal access to the internet”.

Le Monstr: I start by creating a story. I figure out how my characters are going to interact, what kind of twists I can think up to make me and my clients happy. For me it’s about finding that balance between telling a story and leaving room for interpretation. Letting people discover something new every time they take a look.

David: Okay, I’ve got so many follow up questions. First: You have characters? What was the twist you added? (No spoilers!) And how do you leave room for interpretation?

Le Monstr: (He LOLed here.) I do have characters! I’ve spent a lot of time developing my characters and thinking up their backgrounds, emotions and stories. I always work with the same ones and I add new ones every now and again. It’s kind of like I have a collection of puppets I can work with to tell my stories. They’re all pretty hipster-y, detached and like taking their sweet, sweet time. They're all very chill overall. What was your second follow-up question?

David: Ummm… What twist did you add?

Le Monstr: Well my characters are actually communicating with each other.

David: That was a pretty vague answer. But fine. What about room for interpretation?

Le Monstr: I want people to see themselves in my work. I even include cats AND dogs. And I’ve given my characters different personalities.

David: Interesting. Interesting. Let’s talk about cats and dogs for a second. Are you more of a cat or a dog person?

Le Monstr: (He chuckled here too.) I like all animals. But, I do have two cats at home right now. But, and don’t tell my cats this, my dream is to become a dog person.

David: Good answer. So I guess now’s as good a time as any to ask you why you agreed to work with oxio? Why do you like the internet so much?

Le Monstr: It lets us stay connected. Even when we’re all isolated at home during, say, a pandemic. It’s why everyone in my print is alone, but communicating with others.

David: Okay well, this has been an excellent time. I’ve got one last question for you. It’s a doozy. How do you work? What’s your process?

Le Monstr: I spend a lot of time thinking. Then a lot more time sketching. (He held up his hands to make an invisible pile of sketches. Probably 12 inches worth of sketches.) Then even more time composing. I have a minimalist style, so I really have to plan everything well. I use negative space and that creates spaces that maybe can’t exist in real life. Shirts that are “there” but only in a negative sense. So, they aren’t really there. But our eyes fill them in.

David: All those sketches… Do they end up looking like your final piece?

Le Monstr: My sketches rarely look like my final piece.

David: So how do you think up your compositions?

Le Monstr: I build my pieces one character at a time. That means I have hundreds of drawings (3-4 versions of each character) to choose from and work with. I also do my best to keep the imperfections in my drawings and compositions. I think it’s another way people can relate and I can keep the work truly original to me.

David: Thanks Ben! You’re a pretty chill guy and it was great chatting with you.

Le Monstr: Merci ! You too! And thanks for letting me do my thing. Not all clients are as cool and easy going as you.

Okay that wasn’t actually how we said good-bye. But I didn’t take any notes on our good-bye. So, I improvised.

A little more on Le Monstr’s work by Le Monstr

“My work is characterized by simple lines composing black and white illustrations. My characters evolve in scenes inspired by diverse topics ranging from subculture to scientific popularization. By representing them suspended in space and completely absorbed by their activities, I wish to illustrate a state in which they get caught up in a kind of deceleration, abandoning themselves completely in an activity that requires taking time. The notion of “time” is very important in my work: the actions of my characters are not restrained by time, quite the opposite of the usual effect of time on our daily life. The represented activity is settled in time without being affected by it. Thus, if we reach that state, we get suspended in a sort of slowdown modelled on the rhythm of the planets. Without speed and gravity, we can free ourselves from time.

I also enjoy spatial perceptions by performing axonometric scaffoldings and non-vanishing perspectives. The scaffolding appears in my work as a device that is often indispensable to me, but also as an analogy to time by the representation of a frieze of a vertiginous life.”

Thanks Benjamin (aka Le Monstr). You really are a chill guy. Learn more about him on Le Monstr's website and then buy his art. And thanks Danilo for the feedback and once again awesomely adapting another article.

We’re where you are:

We heart the internet. A lot. And our newsletter proves it. Sign up to catch up on everything internet (including us).

Find something
to read.

It's the internet's fault.