It’s personally what I consider the most dreadful aspect of adult life: job hunting online, scrolling through pages and pages on Indeed, parsing through corporate buzzwords like “synergy”, “team player”, and the stress-inducing “fast-paced environment”. But most of all, it’s when I’m sitting there just trying to figure out what a “competitive salary” actually entails because, really, what the hell does that mean? I’m sure I’m not the only one that sees this in job listings and thinks it’s most likely bullshit – a vague description to get candidates through the door only to underpay them.

Indeed describes “competitive salary” as “compensation that includes higher salaries and more generous benefits packages than those provided at similar companies or jobs” but in a culture that finds it taboo to even discuss one’s own salary, how do we know if what we’re being offered is actually competitive?

Will the pay equity act make a difference–wait, what even is that?

Last year, the Canadian government put their Pay Equity Act1 into motion, requiring employers to look into their payment practices and create a solid plan to close any pay gaps that may exist. If you haven’t heard about this yet, it may be because employers have been given a comfy time period of 3-5 years to roll out their pay equity plans and actually put them into action. For your convenience, here is a TL;DR of this act:

If all this sounds a bit too familiar, it may be because the government of Ontario passed their own Pay Equity Act in 19872 which just goes to show the persistence of this issue and how even decades after this act was passed, pay inequity still exists in Ontario3. In fact, it was only two years ago that the Ontario Human Rights Tribunal, after nearly a decade of court battles with the provincial government, was able to have a tribunal rule in their favour4 that gendered pay discrimination for midwives needed to come to an end. (By the way, the Ontario government tried to overturn this decision not even a year later5.)

But I’m not here to depress you or bog you down with legal jargon and statistics; rather, I want to open up a discussion about pay equity as it relates to transparency and our cultural norms.

The world of employment websites is a hellscape.

A week ago, out of curiosity, I decided to take a quick scroll through job postings for my current position as a customer care agent to see what was being offered out there. While I was bombarded with the predictable “competitive salary” pitch, there were some other salary listings that left me bewildered, such as this one6 offering $1.00/year (the cryptic “bonus pay” seems really promising though). 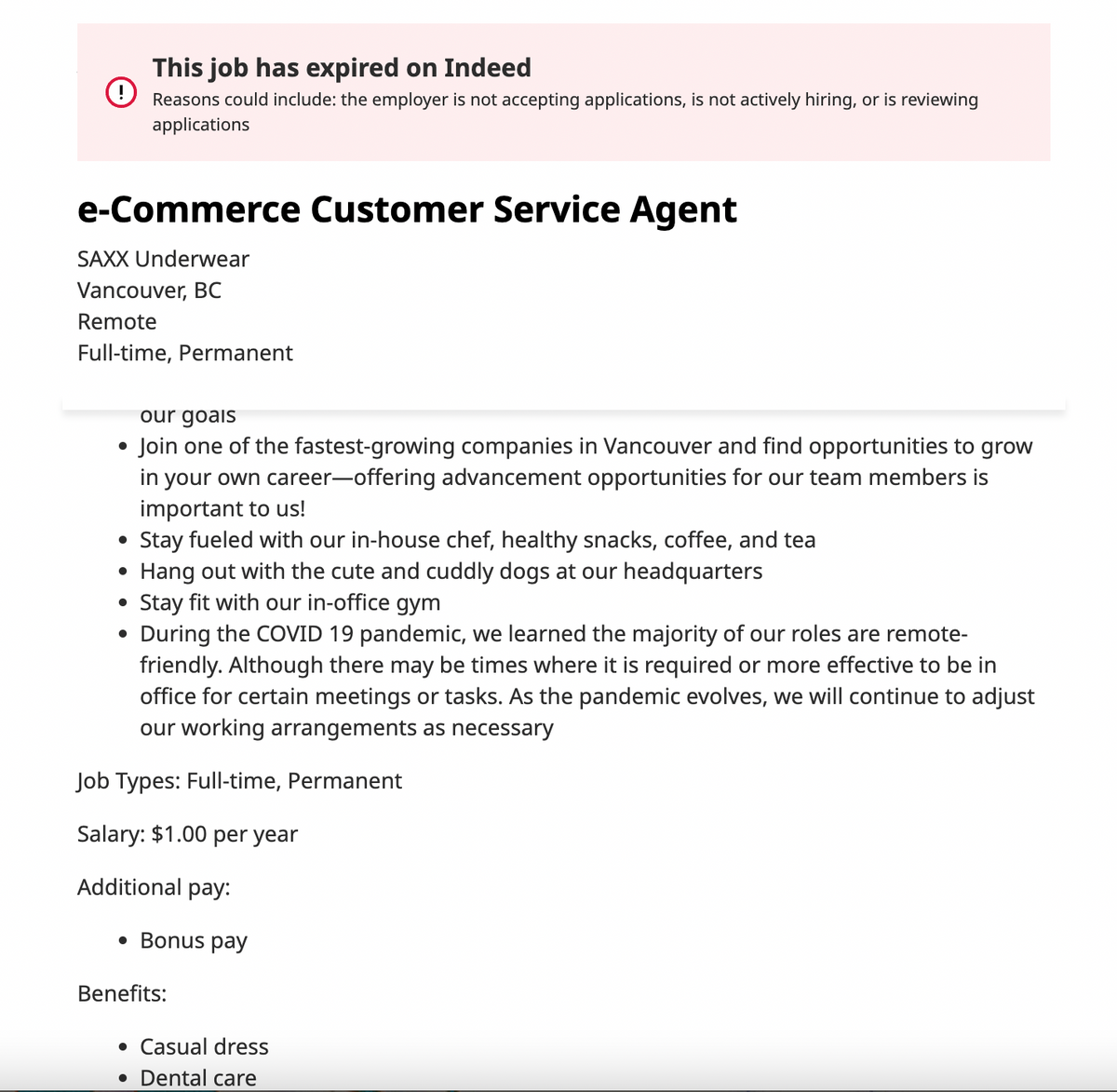 Unfortunately, this is not too out of the ordinary, and this job listing was on the very first page of my search. While I highly doubt any company is truly offering a $1.00/year salary, it just goes to show how little care is put into being transparent about pay.

This culture of being secretive about salaries is nothing new; even from a young age, most of us are taught that it’s rude to ask people about money. It certainly does seem like a generational difference, with more and more millennials shedding this unspoken rule7 while baby boomers do seem to be steadfast in it.

And while, sure, it may be uncomfortable for a dinner guest to be asked how much they make in a year or how much they pay in rent, we need to start questioning the motives behind the "corporate" taboo of discussing pay. Who benefits from this secrecy and lack of transparency? (Hint: it’s not the workers8.)

At my previous job, at the height of the Covid-19 pandemic, I was given a raise. To quote directly from the email: “We cannot and are not offering this to many employees, so please keep this confidential.” While, at the time, I was pleasantly surprised and willing to keep it confidential if it meant being able to pay off my student loans faster, it would be a few months later that I would realize that this lack of transparency was hurting my co-workers as well as myself.

I recall a moment, nearly a year after being sent the above email, in which I was promoted. It felt great… until I accidentally saw the pay stub of the employee I had taken over for and felt like I had been scammed. Not only was I making less for doing the same work as her, but I was still performing the responsibilities of my former position.

To break it down, before my promotion, I was making about $16.20 an hour which, at the time, was a dollar over minimum wage. The raise I had received was quite generous, I had thought, because suddenly I was making $20/hour. That being said, I was now doing double the amount of work, being contacted when I was off the clock, and found the job taking over my entire life. And the girl I replaced? She had been making $25/hour.

In short, they did not match my value with the pay they offered me. This was essentially what they were doing to everyone. (I may have snooped through everyone’s cheques one day. Pro tip: if you’re going to be shady about payment practices, don’t put all your employees’ cheques in open envelopes with their names on it.)

This was something I long considered a norm until oxio came along, introducing me for the first time to this mystical thing called “radical transparency.” Within my first few months of working here, an anonymous survey was sent out to every employee asking how we felt about our salaries being public within the company and outside it as well. It was pretty much unanimous that everyone was for the transparent salary model within the company but had their fears about this information being available publicly, citing loss of privacy as the main reason for being opposed to the idea.

Well, oxio listened, and our transparent salary model was put into action (click to read the blog article detailing the specifics!) And to follow suit, I’ll let you know that as a customer care agent, I currently make $43,680.00 a year.

Being transparent about salaries doesn’t just benefit the company, it benefits everyone.

The tools people need to research salaries are out there, but they’re far from accessible – websites like Payscale and Glassdoor are free but don’t exactly represent the current market or take into account an employee’s experience. Then there are the more accurate databases like Option Impact which are typically geared towards a company’s HR department and not accessible to the average person seeking a job. So, while employers have access to this information, it certainly isn’t easy access nor is there an incentive to tell their employees “hey, wanna know what other people in your position are making?”

At the time of this writing, “pay secrecy” policies are commonplace amongst nearly half the working population – workers aren’t just discouraged from discussing pay, they are actively being barred from doing so9.

While there are some arguments for keeping salaries private, with the main one being that discrepancies in pay could cause drama in the workplace10, this is only an issue if your employer is actively engaging in unfair payment practices. Let’s just say, there’s a reason Air Canada would have preferred to have the salaries of their flight attendants and pilots kept private. A quick recap if you’re not familiar with what happened in 200611:

So if you’re wondering at this point how the employer benefits from salary transparency, well it’s really quite simple: employees who feel like their work is valued tend to perform better12. And I can confirm that after taking a quick peek at what some of the more experienced employees at oxio are making, I am more determined than ever before to steal their jobs (if you’re from oxio reading this, I’m kidding).

I won’t pretend oxio was the first company to introduce the transparent salary model – in fact, Starbucks committed to one 4 years ago, and it seems to still be going strong13 – but who was first doesn’t matter, so long as we can challenge other companies to do the same. On a smaller scale, we as individuals can also start challenging these norms by beginning to ask questions instead of shying away from them and being the model of transparency we wish to see. Easier said than done, I know, but I hope that with these changes, researching salaries will eventually become a hell of a lot easier.

Article written by Yeona Lee with amazing guidance from David Purkis and Danilo Tubić with some help from Audrey Desgagnes and Michael Reid.

We’re where you are:

We heart the internet. A lot. And our newsletter proves it. Sign up to catch up on everything internet (including us).

Find something
to read.

It's the internet's fault.